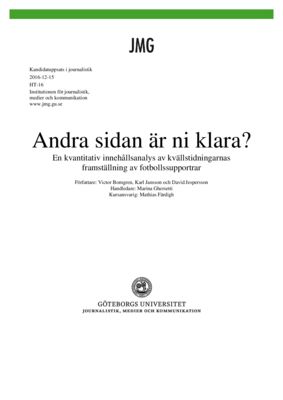 Authors: Victor Bomgren, Karl Jansson & David Jespersson
Title: Andra sidan är ni klara? Level: Bachelor of Journalism Location: University of Gothenburg Language: Swedish
Number of pages: 46
A lot has been said about football fans. And a lot has been said about what is being said about fotball fans.
Football fans are violent, criminals, troublemakers, dedicated supporters, colourful, musical and missunderstood. Since the very beginning of the sport they have played their part: Singing their hearts out, waving their flags, fighting rival fans and thrown coins on the players on the pitch. They are indeed an interesting bunch of people and newspapers love to write about them, a lot.
The purpose of our study is to map how evening newspapers in Sweden have been writing about football fans. To correctly account for every article that has been written about swedish football fans is a tall order for sure, and would take a considerable time to complete. We haven’t been that ambitious, but still have managed to gather a significant amount of articles that give us a right to argue that we can, with some accuracy, make assumptions about how the swedish evening newspapers Aftonbladet and Expressen have been writing about football fans since the mid seventies.
We conducted a quantitative content analysis of articles written about Stockholm derbies including the clubs Hammarby, Djurgården and AIK between the years 1975 to 2015. We read all the articles related to the derby from the day of the game and the day after. The reasoning behind this was that these two days are the article heaviest with the articles from the matchday building up to the game and the articles from the day after dissects the events on the pitch as well as on the stands.
We marked all articles related to the derby into SPSS but stopped coding after six variables if the article didn’t include any mention of fans. If the article did, however, we marked up to twenty variables. The variables ranged from placement of the article in the newspaper, nature and size of the article, in what context fans were mentioned, in what manner the fans were described, who are featured in the article with quotes and opinions, if the fans were described as a collective or as individuals to how supporters were portrayed in pictures.
The choice of newspapers to study was a fairly easy one as Aftonbladet and Expressen are evening newspapers with the country’s largest coverage of sport news.