Examining the reciprocal relationship between selective media use and crime perceptions 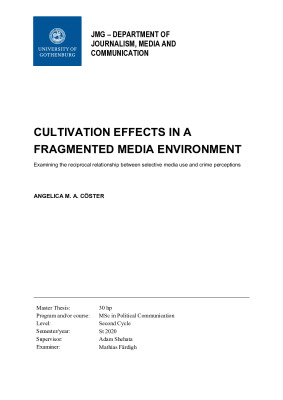 Our media environment has changed rapidly since the cultivation theory was proposed by Gerbner in the late ’60s. The amount of news media content has increased to an unprecedented level and the surge of alternative media sites has given news media consumers the option to selectively expose themselves to news that conveys a version of reality which is aligned with their own perceptions. This study aims to examine whether the cultivation theory, as it is currently defined, is still relevant in today’s fragmented media landscape or if it should be redefined to better capture selective reinforcing cultivation effects. This will be done by theoretically synthesising the cultivation theory with the reinforcement spirals model. To address these questions empirically, this study relies on a combination of a quantitative media content analysis (N=904) matched with longitudinal panel survey data (N=1508). Thereby, content differences in violent crimes news reporting can be linked to public perceptions about the development of violent crimes in society. The findings from the content analysis suggest that there are significant differences between violent crimes news content in alternative media and in traditional media. The results from the cross-lagged panel analyses suggest that reinforcing cultivation effects only occur for alternative media use. The theoretical implication of this is that it is no longer reasonable to assume that significant cultivation effects will occur on the large mass. Instead, reinforcing cultivation processes occur on smaller segments of the population where media selectivity is the driving force. Cultivation theory should, thus, be redefined to include the selectivity aspect of media consumption. To synthesise cultivation theory with the reinforcement spirals model is, as shown in this study, one way of doing this but an even better way would be to develop the original theory to include the aspect of
selectivity and exclude the idea of mainstreaming.