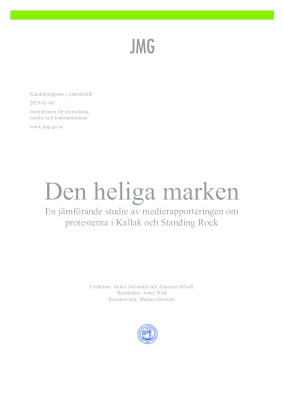 This study examines how two protests were portrayed in the Swedish news media; the protest of indigenous people against a mine in Kallak, in the region of Norrland in Sweden, compared with the protest of indigenous people against a pipeline in Standing Rock, North Dakota in the U.S. The purpose is to investigate if there are any differences linked to the Swedish newspapers relation to their own national identity.

The conflicts are similar in each case since both are about land issues and its cultural and environmental importance for the indigenous people. Furthermore both conflicts include the same main actors; the protesters, the government, the police and the company behind the mine/pipeline. The study therefore argues that the protests are comparable.

The study adopts a theoretical framework informed by post-colonial theory, media logic and critical discourse analysis, and the empirical study was also approached through critical discourse analysis. The material consisted of 12 articles from four of the largest nationwide newspapers in Sweden; Aftonbladet, Dagens nyheter, Expressen and Svenska Dagbladet. The results show that the conflicts are lifted to very different political levels. In Kallak the conflict is presented as local, with few connections to decision-makers. Here the responsible part was largely portrayed as being the companies. In Standing Rock on the other hand there was a specific focus on the presidents of the U.S who were portrayed as being ultimately responsible. Furthermore, the reporting of Standing Rock linked the protests to a colonial history, which was not done in the reporting of Kallak. The study argues that the results indicate that the national identity of journalists influenced the coverage of these protests. In addition, we argue that the media logic plays a big part in the result, especially through simplification.