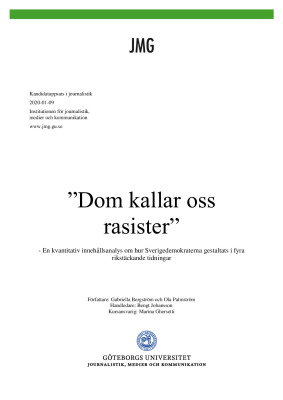 Aim of thesis: The purpose of this study is to examine and analyze how the Populist Party the Swedish Democrats have been described in news media before the general elections of 2010, 2014 and 2018. We are also interested to see if the descriptions have changed over time.
The aim is not to see how much they have been covered in the news. Nor if the news coverage has been positive or negative, but with which words and qualities they have been characterized. Words are not just words. Specific words can say something about thought patterns and feelings. By looking at words you may be able to draw conclusions of a bigger picture.

We are also investigating if there are any differences in the news coverage between morning papers, such as Svenska Dagbladet and Dagens Nyheter, and evening papers, Aftonbladet and Expressen.

Theoretical framework: Since one of our study’s main purposes is to systematize specific words we are using the framing theory with a linguistic approach.

Methods: We are using a quantitative content analysis, a method that is well suitable when you have a big amount of data. It is commonly used when the analysis procedure consists of quantifying
or measuring the incidence of something in a text. In our case, words in articles.

Results: Our results show that the most common frames are “racism”, “nazism/fascism” and “immigration”. In total they make out fifty percent of all the frames. It also shows that the negative descriptions of the party do not change over time, but the way of saying them does. In 2010 more of the descriptions came directly from the journalist and were critical of their present politics. Before the general election of 2018 the journalist quoted others in a larger range and the criticism of The Swedish Democrats was addressed to their history and ideology rather than their politics. Due to this, the immigration frame decreased immensely in 2018 while “nazism/fascism” became the most commonly used frame.