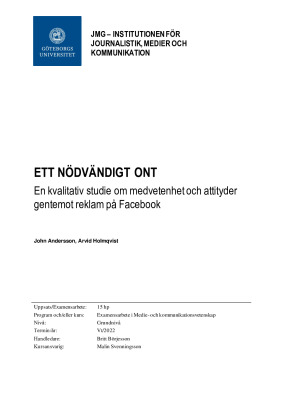 Every day we are exposed to a large amount of advertisements. As social media has become an important part of many people’s lives, advertising on these platforms has also become important for advertisers and major sources of income for the companies behind the social media. The most
common type of ads on Facebook are native ads in the user feed and these ads are in most cases very similar to the posts that the user sees from friends and pages they follow.

When it comes to awareness of native ads on Facebook, previous research has shown that when
consumers do not perceive sponsored content as advertising, they receive the message as organic.
Consumers who discover and distinguish native ads have a more negative attitude towards the
advertiser. A number of parameters play a role in how consumers perceive native ads as
advertising, but perhaps the most important and clearest of these is the labeling.

As a theoretical framework, we have chosen to use the Persuassion Knowledge Model, which is used to examine awareness of and reaction to persuasion attempts. We also use Reactence theory and Gestalt laws.
Our results were in many cases in line with previous research and we could see that the attitude was often ambivalent. When it came to targeted advertising several respondents were positive about the fact that they were relevant but negative towards the data collection that makes targeted
advertising possible. None of our respondents had a particularly positive attitude towards ads on Facebook, but several saw them as a harmless advertising tool, which they had gotten used to and which has become a natural part of thier Facebook usage. Occasions when the advertisements
aroused negative feelings in respondents were, among other things, when they received advertisements for goods they had already bought, something we in this study link to Reactence Theory.

All respondents were aware of what the labeling of ads looks like on Facebook and thought they could comfortably identify ads from organic content. However, there was a difference in the number of ads respondents thought were in their feed and how many there actually were. This opens up a discussion about the respondents’ actual awareness and also the homogeneity of the feed.