EUROPE(ANS) AND THE CLIMATE – TOWARDS A EUROPEAN PUBLIC SPHERE?

A Comparative Framing Analysis of News Media and Twitter Discourse in Sweden, Spain and Germany 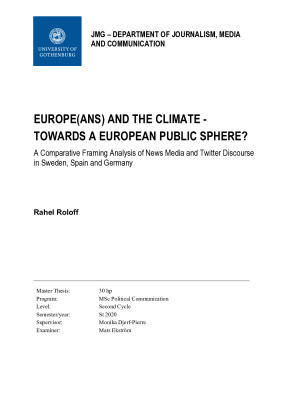 The issue of climate change, as a crisis without borders and the EU as political realm, holds the
potential to unite Europeans under a common fate and mission. As this study applies a social constructionist view, reality is understood as constructed in and through the media. The aim is to
examine if and how mediated communication on climate change reinforces a European identity, and hence creates a European Public Sphere. This is looked at through a comparative framing analysis of news media and social media in Sweden, Spain and Germany in the week after the European Parliament’s climate emergency announcement in 2019. Theories of the European Public Sphere, European Identity, Global Journalism and Social Constructionist Framing build the grounds for this thesis. A systematic reading of mediated communication of climate change, guided by categories of a European Outlook facilitate this qualitative framing analysis. The results of this study do give reason for some speculations about the Europeanization of national discourses happening parallel in Spain and Germany. Swedish news media scarcely showed a European Outlook, whereas an emerging counter-public on Swedish Twitter enables a re-politization of the climate debate. An issue public sphere, or “European risk community” can be spoken of, rather than a European Public Sphere. Support can be found for a European identity, carried by an “imagined community” of countries dependent on a strong EU and an identification through the latter. This gives reason to assume, that the global crisis of climate change goes both ways. It does strengthen the Europeanization in some countries, but it weakens it in others.