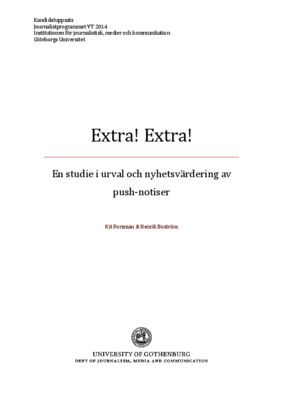 This case study aims to find out whether the promotion of Swedish news through push technology, and the selection process behind it, obeys the traditional criteria of news values. A months-worth of push notifications, sent out by the mobile phone applications of newspapers Dagens Nyheter and Expressen, were analysed through the application of a number of taxonomies meant to determine their newsworthiness. These taxonomies were, however, based on 20th century media, and do not necessarily adapt well to analysis of digital news publication forms. The purpose of this study is therefore to find out which criteria are still relevant to the news selection behind a digital format such as push notifications; and which have become obsolete. The basis of this study is the criteria of news values originally designed by Galtung and Ruge in 1965 and revised by Harcup and O’Neill in 2001; as well as the model of assessing front page news proposed by Hvitfelt. The content analysis was conducted in a manner as similar to that of Harcup and O’Neill’s own study as possible, so as to constitute a re-revisal – revamped for the digital age. Our results show that the criterion of “frequency” – that is the conformance between the time-span of an event and the publication frequency of a medium – has acquired an ambiguous importance. Urgency and freshness of an event have become the most important factors of newsworthiness; still the term “frequency” seems antiquated when there is in digital media no such a thing as a conventional deadline. We conclude by suggesting a further revisal of the Galtung-Ruge-Harcup-O’Neill-criteria, better suited to formats such as push notifications.