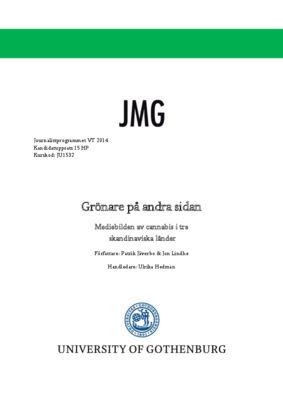 Authors: Patrik Jäverbo & Jon Lindhe Title: Greener on the other side Level: Bachelor of Journalism Location: University of Gothenburg Language: Swedish In later years the strict laws and policies surrounding cannabis use have been questioned around the world by several influential leaders, among them US president Barack Obama and former UN secretary general Kofi Annan. It has been argued that the “War on Drugs” has done more harm than good and in some American states and a number of European countries the drug have been legalized or decriminalized. Everybody does not agree however, that legalization is the best course of action and in Sweden the emotions have sometimes run high in the discussions taking place in television shows and newspapers. The purpose of this study is to examine the image media portrays of cannabis; based on the theory that mass media is an important influence on the individual and the way in which he or she views the world. To put the result into a context the Swedish media image will be compared with the one in Denmark and Norway. The main goal is to investigate if there is any difference in the way cannabis is portrayed. To accomplice this task we performed a quantitative content analysis and a framing analysis of 354 articles published online in 9 different newspapers, three for each country. The articles where published in March 2013 and March 2014 and the selection was made using the search engine Mediearkivet, and a search string composed of the three most common words for the drug: cannabis, hasch and marijuana. We found that although the frequency of articles about cannabis and the position of cannabis in the news differed between the countries, the overall image were quite consistent. We found four general ways in which cannabis was framed: a crime frame, a danger frame, a legalization frame and a glorification frame. We also saw that cannabis users where described differently depending on their age and position in society and that cannabis was understood in one way in some articles and in a completely different way in other articles. We argue that this makes the overall image of cannabis in Scandinavian newspapers a fragmented one.