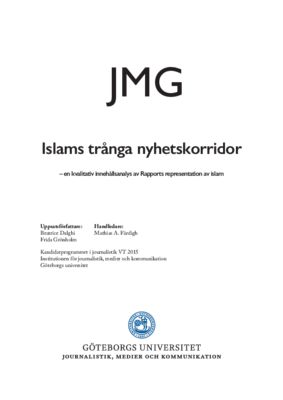 In this study, we research how Islam and muslims are portrayed in Rapport, the highest rated daily news broadcast in Swedish television. We have done this by applying the Ethnographic Content Analysis (ECA) to our material, news reports of April 2014. The theoretical basis of this report derive from theories concerning islamophobia. These are theories that state how unfounded hostility towards Islam result in various forms of discrimination against muslims throughout society. Our premise has been that language and media constitute how the public perceive the world and their own place within it. In effect, a unilateral media portrayal of islam and muslims will produce and reproduce negative conceptions of muslims. To analyze how islam is represented in Rapport we have applied four analytical themes on our material: content and subject, muslims in society, language and imagery, islam and stereotypes. Our results show that the news reports with a muslim connection were homogenous and consisted mostly of news from abroad. Most of the reports had a negative spin, concerning violence, terrorist organisations, child marriage, refugees, murders of journalists and prisoners with a death sentence. Prior studies about the portrayal of muslims in news broadcasting have had similar results as our, both internationally and in Sweden. The result of the analysis indicate that Rapport apply their own diversity plan, created to avoid stereotypical portrayals of ethnic and religious groups. At the same it seems islamophobic tendencies are altogether to be found in Rapport’s news reporting. Considering that the Swedes have less negative attitudes towards Islam today, than 25 years ago, the media image should be more diversified.