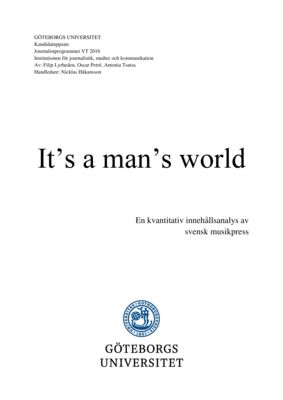 The purpose of this essay is to study the gender representation in Swedish music magazines currently. Through quantitative content analysis we studied the gender representation in terms of text, writers and images. In addition, we analysed the images in order to study possible differences in the way of which women and men are portrayed regarding gender displays.
The magazines studied in this essay are the Swedish music magazines Gaffa and Sonic, Sweden’s two biggest music magazines that cover multiple music genres. The study includes the editorial content of the magazines during the time period of February 2015 to March 2016. The total amount of analysed articles is 262.
The main result of the study shows that 65,3 percent of the analysed content in the magazines highlights male musicians, which is a compared to the 34,4 percent of the articles that concerned female musicians. Furthermore, we found that 78,6 percent of the articles were written by male writers, compared to 17,9 percent of the articles written by female writers alone.
Additionally, in the analysis of images in the music press we found slight differences in the portraying of the genders. The results indicate that women in pictures tend to smile and keep eye contact with the camera to a greater extent than men. This is both in accordance with and in contradiction with previous research. However, these differences were too small to be deemed significant.
The results of this study confirm what previous research has stated; that music journalism as well as the music industry remain male domains.
Key words: music, journalism, gender representation, Gaffa, Sonic