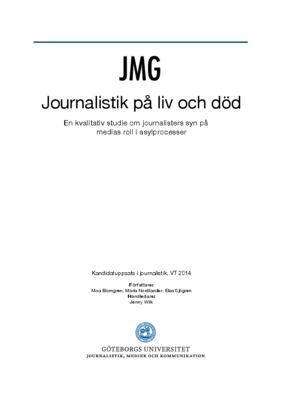 The main purpose of this thesis is to explore journalists’ views of the role of journalism in the asylum processes. The potentially problematic phenomenon is growing, and its spread will affect the way publishing decisions are made in the future. The subject is new and foreign to many journalists, and little to no research has previously been done on the subject. Our study will therefore provide new insight in the field of journalism ethics. We have conducted a qualitative study based on interviews with eight Swedish journalists who in one way or another have reported on threatened asylum seekers. In order to understand the journalists’ responses in a broader context, an interview with lawyer Aino Gröndahl was also included in the study. The analysis is based on theories of journalistic values and ethics, specifically consequence neutrality, objectivity and social responsibility. In addition, journalistic ethics in a changing and global media landscape has been an important theoretical field. The analyze method is based on P. Burnards’ (2008) thematic content analysis. In the analysis we assumed four analytical themes; The Journalistic Task, Relationship to the Source, The View of Consequences and Responsibilities, and The Role in Specific Cases. One of the more interesting results of our study is that journalists are largely unaware of media attention being used as a strategy in the asylum process. Journalists tend to de-emphasize their own importance in asylum cases. Aino Gröndahl, however, confirms that journalists’ actions greatly effect the asylum process. The journalists hardly reflect over the impact an article can create, even though they operate in a globalized and connected world. Journalists often implement consequence neutrality – but respecting the sources’ security is an important factor.