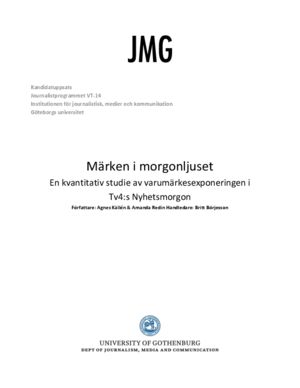 Authors: Agnes Källén & Amanda Redin Title: Level: Bachelor of Journalism Location: University of Gothenburg Language: Swedish Number of Pages: 39 With this study we aimed to answer the following questions: has the amount of brand exposure on the Tv4 show “Nyhetsmorgon” increased between the years 2008 and 2013? And if so, how can the increase be explained by well-recognized research in the field? The media industry is changing toward an increasingly commercial content. In television, this change is mainly caused by the growth in shows watched on the web and through time shift, which is the act of watching something on a digital video recorder, or DVR. This gives the viewer the possibility to fast forward through the commercial breaks, and therefore forces the networks as well as the advertizer to find new ways to reach consumers. Hence the plausible growth in product placement and brand exposure. A Swedish new radio and tv law that came into effect in 2010, regulated the previously unregulated area of product placement, which adds an interesting paradox to our above stated questions. Our findings were that the brand exposure indeed had increased, but only slightly. The difference in registered brand exposures was shown to only be about 6.5 procent. However, other findings were that the number of brand exposures increased on Wednesdays, Thursdays and Fridays, as to prepare the viewers for potential purchases during the weekend. Other patterns within the brand exposures were found as well, for example that most exposures were found to be considered as “neutral”, portraying the brand neither positively nor negatively. All findings were then connected to and explained by established research theories.