MEASURING POPULISM ON TWITTER DURING PRESIDENTIAL ELECTIONS IN LATIN AMERICA 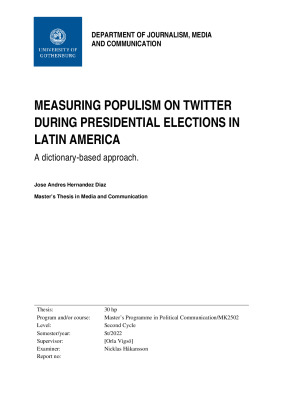 Arguably, populism has become increasingly topic across different spheres: the media, the academia and even the vox populi; and it has become quite common to find political movements and leaders labelled as populists. Therefore, one can say that Populism is on the rise across the globe.

Large debate takes place to define what populism is, what the criteria to label a political leader as populist should be, and whether it is healthy or not for democracies. However, must of the research on Populism seems to take place in the European and North American context, and to a lesser extent in other areas such as Latin America – area that some scholars have labelled as “the land of Populism”.