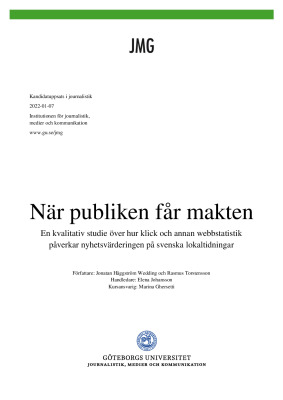 The aim of this study was to investigate how a strategic selection of journalists at Swedish
local newspapers perceive that the significance of audience demand, expressed through web
statistics and clicks, influences and affects their work with news values and news selection
online. Additionally, the purpose was to find out how journalists at Swedish local newspapers
handle the dilemma between reporting about news subjects that they consider to be of
importance for their audience, and news that the audience demands seen through different
web analytic tools.

The study is based on a theoretical framework consisting of journalistic news evaluation
(Galtung and Ruge, 1965; Gans, 2004) and the increasing commercialization of modern
journalism. In the latter, we have reevaluated and processed the known study about the
importance of the four different markets of commercialized media, originally created by John
H. McManus (1994), to better fit the current state of the local media climate in Sweden. As a
result, we have used the processed version of McManus theory in the operationalization of
the study. This theory tool was later used to analyze the results of the study.

The study used a qualitative interviewing method to answer the empirical research questions.
A semi-structured interview guide was constructed where the questions asked were based on
previous research and the theoretical framework mentioned above. Eight semi-structured
interviews were then carried out based on a strategic selection of journalists from eight
different local newspapers in Sweden. Besides the different geographical positions, the
strategic selection included a variety of ages, work roles, media concerns, previous
experiences and genders.

The findings of this study implied that the usage of statistics and clicks, as a tool to examine
what the audience demand, greatly affects the news evaluation at Swedish local newspapers.
The interviewed journalists perceive that these statistics influence the work in many aspects.
For instance, the journalists know which news subjects will perform well online and will
therefore adapt the news evaluation accordingly. More so, the amount of attention news gets
from the audience greatly affects the exposure on the front page. The result of the study also
shows that the local journalists believe that reporting about important subjects, such as local
politics, is crucial. At the same time they also experience that these coverages have decreased
as a result of how they perform online. To prevent the “important” news from disappearing
completely, the journalists seek to present them in a more attractive way.