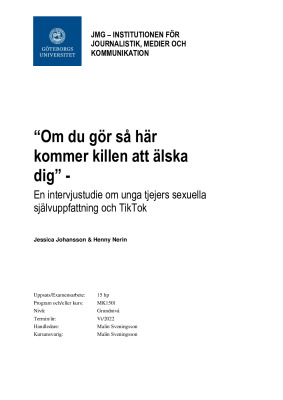 Executive summary
TikTok is a social media platform centered around short user-produced video clips. It is one of the biggest social media platforms in the world with one billion active users, the majority of which are made up of young people. In Sweden most users are under the age of 24 and most of them are girls. The difference between TikTok and other social media like Instagram and Facebook is that the content is highly personalized based on algorithmic calculations. Previous interaction, such as liking, commenting, or sharing content, presents the user with what new research terms The Algorithmized Self, a reflection of one’s own identity through the algorithm (Bhandari & Bimo, 2022). Furthermore, the app is ripe with sexual content, where sex-ed, nudity, tips about sexual activity and dating are common. Previous research has shown that the media is an influential aspect of young people’s sexual socialization (Shafer m.fl, 2013). Media presents sexual scripts of favorable and unwanted behavior that the young person internalizes and uses in their everyday life, TikTok is no exception. Furthermore, previous research has shown that girls, when discussing their sexuality online, tend to focus
on how to please men (Grisso & Weiss, 2005). Women also tend to accept information about male sexuality more easily since they do not have that experience themselves (Ward & Rivadenyra, 1999).

Interviews were conducted with nine Swedish females in the ages between 16 and 23 performed in groups of two or separate. Through this we hoped to gain insight into young women’s experience of sexual content on TikTok and what it says about their sexual selfconcept. All interviews were conducted with two interviewers and were recorded and transcribed. Theories used in development and analysis of the study were Media Practice Model (Steele & Brown, 1995) and Sexual Self Concept (Hensel et al. 2010). The choice to
focus on only young women’s sexual self-concept is based on previous research that shows that women’s sexuality long has been a subject surrounded by taboo and controlled by other than the woman herself. Social media has also been found to act as a safe space for women to discuss and discover aspects of their sexuality that they cannot do in real life.

The results of this study show that the interviewees were exposed to several media scripts about how to behave, look and navigate to succeed in romantic relationships and sexual encounters. They were presented with both helpful and truthful as well as misleading information which they either accepted or rejected. The interviewees expressed a concern that this false sexual information could mislead young people without any previous sexual
experience. Previous research has shown that young people more easily accept sexual media messages about things they do not have personal experience of, which we also found signs of in this study. In addition to this, we discovered indications that sexual media messages on TikTok could both weaken and strengthen sexual esteem. Interviewees with strong sexual
esteem stated that they would question themselves in a sexual context when they were confronted with sexual media models or messages they could not identify with. On the other hand, sexual esteem seemed to increase by TikTok enabling normalization of their own sexual desires, act as inspiration and helped them discuss sex with friends and partners.

Our results align with previous research that TikTok’s algorithm reflects identity back to the user. Our findings indicate that the app’s “For You Page” might be used to confirm and reinforce young people’s already existing sexual self-concepts, whether they be positive or negative. This is of importance since research has shown a connection between sexual self concept and young people’s sexual health.