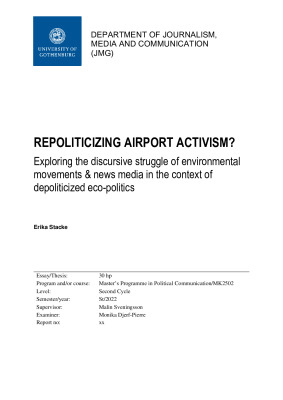 In a situation of ecological degradation and rapid climate change, environmental movements aim to create debate and attain political change. Here, news media is an important actor, possessing the power to represent movements and their cause in ways that legitimize or disqualify their voice in public debate. This study explores environmental movements and news media as participants in discursive struggle, where both may shape eco-political debate to either reinforce or challenge prevailing political narratives and ideas. The study analyzes a case of Extinction Rebellion (XR) airport actions in Sweden on Oct 31, 2021, where their acts of civil disobedience created significant coverage in Swedish press.

Within research on eco-political discourse, theorizations of post-politics and depoliticization have been important, and regard the shift where consensus- and technocratic approaches have displaced discourse that acknowledges ideology and conflict. In depoliticized discourse, ideology is replaced by rational or moral arguments of right and wrong, good and evil, turning legitimate adversaries into delegitimized opponents – thereby hindering political debate.

Against the context of depoliticized eco-politics, the study explores how XR and news media contributed to depoliticizing (closing) and politicizing (opening) debate around the XR airport actions, using a framework for critical discourse analysis. The data includes press releases and social media posts from XR, as well as news articles and opinion pieces published in three of Sweden’s largest newspapers. The analysis contains a particular focus on how the discursive strategies of positioning and (de)legitimization are used to steer and create boundaries for debate in politicizing and depoliticizing ways.

The analysis found that whereas XR mainly used politicizing strategies to initiate political debate, challenge the status quo, and expand boundaries for debate, the news media material mainly showed signs of depoliticizing discourse. By focusing on apolitical themes such as law enforcement and airport safety, debate was dismissed. XR were repeatedly delegitimized as a political actor, and the eco-political issues raised in the actions were largely overlooked. When debate occurred, it regarded XR’s use of civil disobedience, but not eco-politics. The results can be explained in terms of a closed discursive opportunity structure for movements, meaning they are delegitimized and marginalized as participants in political discourse. The attempt from XR to initiate debate can be described as an aim to repoliticize an area that has been characterized by post-political tendencies. However, this study shows that news media have significant power to steer and limit debate in ways that may hinder environmental movements attempting to repoliticize eco-political discourse in the public sphere.