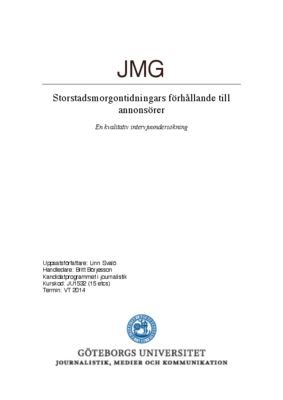 This bachelor thesis focuses on metropolitan morning newspapers in Sweden and their relationship with advertisers. Various forces in society have led to changes in partnerships between metropolitan newspapers and advertisers, which have previously only had small amounts of data. In these particular newspapers, it is common to find editorial advertisement supplements. The reason these supplements are included, their benefits and how they can affect the paper’s credibility have not previously been investigated. I have researched how the changed collaborations between the metropolitan morning newspapers and advertisers look today; including the contact, power and dependence they have on one another. I have also examined the newspaper’s advertising departments affect the credibility of the journalistic product linked to the editorial advertisement supplements. I have furthermore examined the trends and tendencies of advertisement in metropolitan newspapers. The purpose of this study is to describe the phenomena I have investigated and based on my findings give an overall perspective of how it looks in general at metropolitan morning newspapers; there similarities, differences and what these depend upon. For the purpose of being objective and not allowing personal opinions ruin the reliability of my research, I have chosen to interview two persons at each of the newspapers that I selected. This is justified by the fact that decisions concerning partnerships with advertisers and evaluations of advertisements potential impact on the credibility are rarely taken by a single employee. The results from my research regarding metropolitan morning newspaper’s relationship with advertisers can, in some cases, be linked to changes that have occurred in society. In other situations, decisions were made internally at the papers regarding their relationships and amount of cooperation. The results, although partly predicted, have shown surprises that were not anticipated. Overall, it provides a picture of how the relationships and the cooperation between the newspapers and advertisers exist today, and to some extent, how it might look in the future.