THE EFFECTS OF OPEN SOURCE’S DUALITY ON DATA JOURNALISM 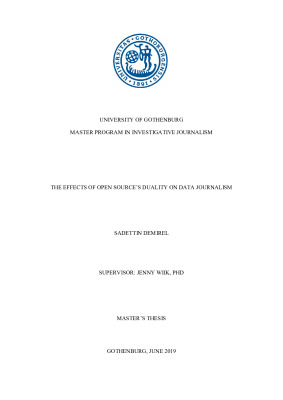 The purpose of this study is to find out how open source community influences the data journalism practices, and to what extent it contributes to solving the challenges that hinder the integration of data-driven journalism into newsrooms. The study approached the subject by drawing from the previous work of Lewis and Usher (2013) which proposes applying the duality of open source which constitutes of open-source culture (values, principles, ethics) and
open-source materiality (software, coding libraries, etc.) on journalism to reconsider possible innovations. For the first time this study concerns with the effect of open source’s duality only on data journalism and its problems. To find out the effects of open source community’s binary structure on data journalism and its potential contributions to tackle with the constraints of data journalism a qualitative approach was preferred and in-depth interviews with 10 data journalists and data journalism scholars were conducted. The main findings reflect that majority of
participants seem to be motivated to follow along with transparent and open way of practicing data journalism while the content of datasets, the license of data sources, newsrooms’ policies and fear of having competitors, lack of time to working and documenting the data analysis are viewed as barriers for this way of practices. Similarly, although many of the participants acknowledge that duality of open source community has a great deal of influence in the
emergence of data journalism, the half of participants do not see open source mindset as a necessity to do data journalism but only a plus. More importantly, it is mentioned that sharing datasets and codes for open and transparent data journalism may not be aligned with some of the journalistic norms and rules. The main arguments of this idea are the closed source culture of journalism, journalistic autonomy, journalistic credibility, journalism’s business mindset, ethical and legal issues of publishing datasets while other half argues that these tensions will disappear as the news reporting digitalizes, the needs of audience changes or that overlook these
tensions and saw open source as a driven force to improve data journalism further. Lastly, the majority agreed on the benefits of open source’s duality to integrate data journalism practices into newsrooms and solve related challenges facing this integration.