“THE GOOD, THE BAD AND THE UGLY” 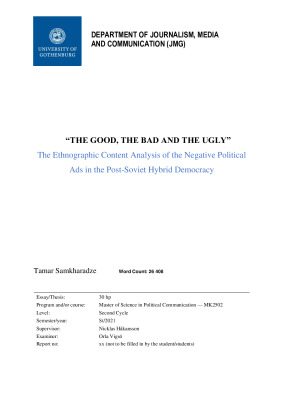 Research in field negative campaigning has demonstrated an anglophone nature. Little is known about strategies of negativity beyond American and the Western European scope. Purpose of this paper is to investigate types of negative ads produced by political parties in post-Soviet, hybrid democracy and determine if well-established findings and theories of negativity can be used to explain dynamics of the negativity in multi-party political system, where political parties as a democratic institutions are weak, political culture is low and personalization of politics is highly demonstrated.
An extensive literature review is done to derive theories and finding from already existed academic knowledge in regard to phenomena of negative campaigning. This study touches upon different aspects of negative ads and examines the types of negative ads produced to attack the competitors durin parliamentary race. The impact of context characteristic, such as personalization and the extent to which negativity is targeted to downplay election completions to political leadership. A step further, diverse techniques to design audio-visual content to transmit negative messages is explored.
To reach the objective of the presented study, rarely used qualitative approach compared to the functionalist approach dominating the field of the negative political advertising is implemented. With the flexible nature of the Ethnographic Content Analysis and construction of unique guiding framework inspired by the M.I.T.S method for studying screen media it became possible to remain sensitive to the yet unexplored political and cultural context and at the same time ensure systematic analysis to account for the scientific credibility.
The results show that types of negative ads produced to attack competitors in hybrid democracy is fully in line with the strategies used in other countries. That is, incumbents attack less compared to parties in opposition with poor poll standings. Due to personalization of politics in the country under investigation, attacks instead of ideological stances target politicians and their characteristics; this tendency was detected in both types of negative ads, whether attacking policy or image of the opponent parties. Lastly, study found that negativity in attack ads is conveyed through different dimensions of the audio-visual content and negativity is embodied in the cues and symbols rooted in the historical and cultural knowledge of the nation.