THE PORTRAYAL OF STRIKES

Framing and source use in Swedish news on strikes 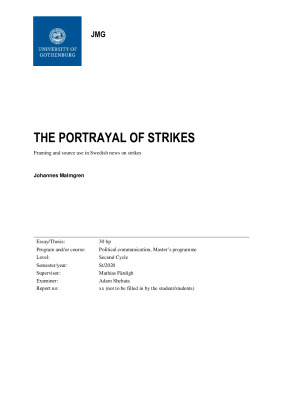 The purpose of this study is to describe how labor conflicts are covered in Swedish news media. Strikes are events that receive a lot of news coverage, while also being the most drastic measure available to organized labor. Due to these circumstances, the news coverage of strikes is a promising focus when trying to understand labor journalism, and what
consequences such journalism has for the labor movement. The journalistic treatment of strikes has not been studied to a great extent in the Swedish context. Therefore, this study has the ambition to fill this gap in research by exploring the journalistic treatment of strikes in Sweden.
The study is guided by a notion that the portrayal of conflicts may reflect wider power relationships in society as well as between the antagonists. Two main concepts are news frame and source access. The former being interpreted as setting the terms of public debate,the latter as possibly contributing in shaping framing of strike coverage, or contributing in assigning credibility to some sources by giving them privileged access to act as news sources.
The overall aim of investigating the portrayal of strikes in news media is specified to a number of research questions. The first two questions address what frames are used in strike coverage, and how the use of frames change with different strike contexts. Another set of questions address what sources that are used in the coverage. The last two questions thus on the one hand address if source selection changes from conflict to conflict, and on the other if certain sources are associated with certain frames.
The method used in this study is quantitative content analysis. This method is of particular
usefulness when trying to answer questions that require analysis of quite a large amount of
news content. The news coverage that was examined was limited to four newspapers, specifically Göteborgs-Posten, Dagens Nyheter, Expressen, and Aftonbladet. The strikes that were investigated were the four most recent major strikes in the country. Two of these strikes were carried out by pilots, one by dockworkers, and one was a wildcat strike by waste collectors.
Frames are in this study defined by their function, they set the terms of debate by diagnosing, evaluating, and making prescriptions when different events and issues are covered in news. As one of the questions this study sets out to answer is what frames characterize Swedish strike coverage, these frames are derived from content. This is achieved by the use of an inductive method were articles are clustered together based on how homogenous they are with regards to some characteristics that function as elements constituting frames.
Four frames were identified in the strike coverage. The most common frame was that of the aggressive union. Other frames where one were the conflict was framed as about the need for dialogue, and one where the emphasis was put on repression and transgression from employers. Lastly, in line with what could be expected from previous research on labor journalism and strikes, a framing of strikes as a threat to the economy was identified in the coverage. The most central frame varied from strike to strike, with the aggressive union dominating the intensely covered strikes, the repressive employer frame characterizing one strike where news coverage was limited, and the threatened economy dominating the fourth strike.