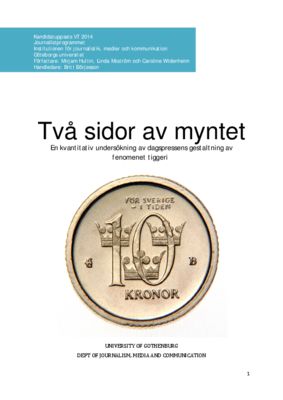 Title: Two sides of the same coin. A quantative content analysis of how Swedish daily press frames begging Authors: Mirjam Hultin, Linda Moström & Caroline Widenheim Subject: Undergraduate research paper in journalism studies Location: Dept. of journalism, media and communication (JMG) University of Gothenburg Term: Spring 2014 Supervisor: Britt Börjesson, JMG, University of Gothenburg Language: Swedish Number of pages: 45 (excluding appendix) Background: During the late twentieth century, there was a debate in the daily press concerning the increase of homeless and beggars in Stockholm. Voices arose wanting to make it illegal to beg, especially in the subways. Today, the issue is again up for debate now focusing on the increase of migrants from poor countries of the European Union. Purpose: The main purpose is to examine how the phenomena beggary is portrayed in the daily press. We aimed to make a comparison between two periods, 1997-2000 and 2007-2013, and between different newspapers. Method: A quantitative content analysis of four major Swedish newspapers using a digital archive and a search string designed to sort out all articles concerning beggars in Sweden. A total of 352 articles from four major newspapers from the first and the second period were coded and analysed. Results: In our compared periods of time, we met two different portrayals of people begging and beggary. The person who is begging is in most cases being talked about and may rarely be heard, while as politicians and/or office holders are most frequent as main agents. In the nineties, the person begging is (implicitly) swedish, while during the 21st century, half of the articles presents the “beggar” to be from Romania. The most common is to not state a cause to the beggary, but when they did in the nineties the most common was homelessness, addiction and poverty. In the 21st century, the most common cause is poverty, though it is interesting that coercion and discrimination never was mentioned in the nineties, while today it’s mentioned frequently.