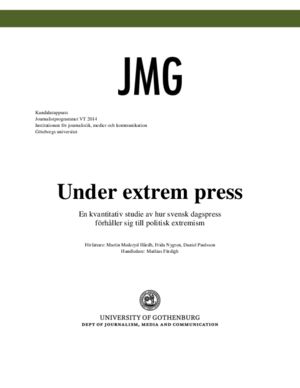 Authors: Martin Mederyd Hårdh, Frida Nygren, Daniel Paulsson Title: Under Extreme Pressure Level: Bachelor of Journalism Location: University of Gothenburg Language: Swedish Method: Quantitative content analysis Pages: 38 Politically motivated extremism is a common topic in the Swedish public debate – and hence in Swedish media. The purpose of our study is to get an idea of how the media relates to the extremist groupings. On a traditional political scale, ranging from left to right, our study focuses on the Swedish extremists who figure on the outskirts of this scale; The ones who denounce the current system and opt for violence to change it. Violence is often an instrument used to get extreme political ideals in the public eye, and is seen as a threat to the Swedish democracy and the public in general. Both sides argue that the Swedish press is tendentious and treat the various extremist groups differently, airing their distrust for the media as a propaganda tool for these groups to establish themselves in the public debate. Our study consists of a quantitative content analysis where we study articles published in print by seven major Swedish newspapers. The selection of articles were gathered by using broad search strings in a database, to identify articles containing wordings related to right-wing extremism, left-wing extremism, and political extremism in general. 967 articles published in 2012 and 2013 were picked out. Our results demonstrate that right-wing extremism is the subject of the articles to a larger extent than left-wing extremism, but with some inconsistency. We show what events that trigger the press to write about extremism and who acts in the texts. Our study is somewhat limited by our narrow selection of articles and the fact that we to an extent have relied on personal interpretations. The results are difficult to compare to any kind of prescriptive condition and should rather be seen as a foundation for further research. Altogether, this study cannot claim to give answers to any questions about whether or not the press remains objective in regard to extremism. It can give answers that pose further questions.