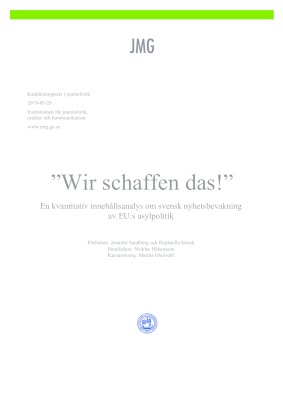 During the refugee crisis of 2015 and 2016 the European Union experienced an unparalleled amount of refugee and migrant arrivals. ​As member states and political parties disagreed on how to respond to the migratory pressures, ​the parliaments ​2014​-​2019​ legislative ​term would be characterized by numerous internal conflicts.

The purpose of this study is to examine Swedish news coverage of the asylum issue at EU level during the parliamentary period of 2014-2019. We will examine how frequent the news coverage has been and how the issue has been framed by implementing a quantitative content analysis. The material that was analyzed consists of news articles from four major Swedish newspapers. For comparison we chose two daily national newspapers; Dagens Nyheter and Svenska Dagbladet, and two tabloid newspapers; Aftonbladet and Expressen. We sampled content from five years of daily newspaper editions by selecting 20 constructed weeks, and using keywords to single out content relevant to our study. We investigated the prevalence of six generic frames described in previous research on framing common in media coverage of politics; attribution of responsibility, human interest, conflict, economic consequences, strategy and morality frame. We also base our quantitative content analysis in the theory of issue-attention-cycles, that are the way in which the media or the public pay attention to an issue over time.

The main findings in this study show that Swedish news-coverage of asylum issues on an EU-level follow a cyclical pattern, and that coverage of the issue peaked in the third quarter of 2015. The daily press accounted for 68% of the coverage on the issue and DN had an existing coverage throughout the parliamentary term of office, while the coverage by the tabloids was mostly concentrated in 2015 and 2016. Overall, the attribution of responsibility frame was most commonly used in the news published in the printed press by the four news outlets.