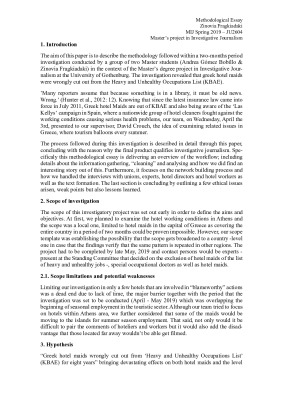 The aim of this paper isto describe the methodology followed within a two-months period investigation conducted by a group of two Master students (Andrea Gómez Bobillo & Zinovia Fragkiadaki) in the context of the Master’s degree project in Investigative Journalism at the University of Gothenburg. The investigation revealed that greek hotel maids were wrongly cut out from the Heavy and Unhealthy Occupations List (KBAE). ’Many reporters assume that because something is in a library, it must be old news. Wrong.’ (Hunter et al., 2012: 12). Knowing that since the latest insurance law came into force in July 2011, Greek hotel Maids are out of KBAE and also being aware of the ‘Las Kellys’ campaign in Spain, where a nationwide group of hotel cleaners fought against the
working conditions causing serious health problems, our team, on Wednesday, April the 3rd, presented to our supervisor, David Crouch, the idea of examining related issues in Greece, where tourism balloons every summer.
The process followed during this investigation is described in detail through this paper, concluding with the reason why the final product qualifies investigative journalism. Specificaly this methodological essay is delivering an overview of the workflow; including details about the information gathering, “cleaning” and analysing and how we did find an interesting story out of this. Furthermore, it focuses on the network building process and how we handled the interviews with unions, experts, hotel directors and hotel workers as well as the text formation. The last section is concluding by outlining a few ethical issues arisen, weak points but also lessons learned.