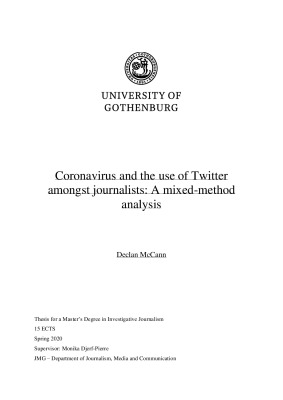 The coronavirus pandemic has had an enormous impact on humanity and news media has become dominated by coverage of the virus. This thesis examines the ways in which journalists have used Twitter during this time. Focus was placed on the journalistic roles that
the journalists performed on Twitter. There are relatively few examples of previous research that has examined the performance of journalistic roles on social media, nor their performance during times of crisis. A mixed-methods analysis was undertaken into the Twitter feeds of six British and Swedish political journalists from varying organisations, utilising Hanitzsch and Vos’ (2018) journalistic roles in the domains of political life as a theoretical framework. What was found that whilst a large number of tweets were able to be categorised according to this
framework, there remained a large deal of behaviours unique to crises and the coronavirus pandemic that were unable to be categorised. These were termed ‘Journalism of Patriotism’, ‘Journalism of Hope’, and ‘Journalism of Collective Responsibility’. Moreover, the extent to which the journalists engaged in personalisation on their Twitter feeds was examined, which found a substantial incorporation of personal experiences of the coronavirus pandemic, as well
as the inclusion of humour. In addition, it was found that the unique circumstances lead to increased sociability in the Twitter feeds of the journalists examined. The findings raise questions about the applicability of preconceived journalistic roles to the study of role performance during times of crisis.