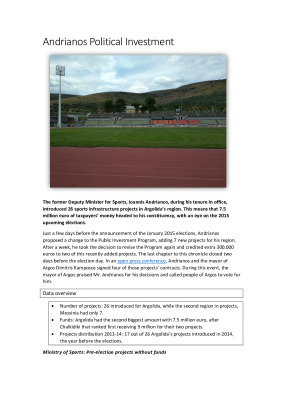 The story is placed in Argolis, a small prefecture of about 97.000 people in the south of Greece. There within a two year period between 2013 and 2014 was planned to take place 26 sports infrastructure projects through the Public Investment Program. This number represents the 30% of the total number of projects included in the Public Investment
Program ranked them first among all the regions. At the same time, Attica region, the seat of the capital Athens and the biggest region in Greece with around 3.8 million people received 17 projects placed second, whereas most of the regions had one or two projects and some even none. Moreover, a budget of about 7.5 million euro, the 13% of the total budget funneled to this small prefecture.
What makes the situation even more interesting was the person responsible for proposing the sports projects for inclusion to the Public Investment Program, the Deputy Minister of Sport at that time Ioannis Andrianos. Andrianos beside his role as a Deputy Minister of Sport was also an MP that is elected in Argolis regional unit. A very interesting and worth investigating coincidence.