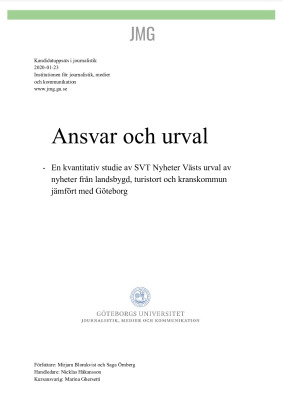 This study is an analysis of SVT Nyheter Väst ́s news selection. Previous research shows that the media coverage in Sweden is becoming more concentrated to bigger cities. As a result, smaller municipalities and the countryside risk to suffer the consequences of insufficient information about their own community. The concentration to big cities in media is due mostly to harsh economic conditions. A pinched economic situation forces rationalization, leading to fewer journalists in each editorial office. That in turn leads to less possibilities and interest of writing and publishing news that are related to places outside of big cities.

SVT is one of three public service companies in Sweden and have a particular responsibility compared to commercial news media. The alignment of the content is that public service media are obligated to provide citizens with enough information about their society to enable political engagement. Therefore, public service media such as SVT Nyheter serves a key role in a democratic society. A coverage that is to narrow and excludes certain geographic areas could implicate that such ideals are not lived up to. Therefore we have decided to look into one of SVT ́s local editorials to find out how their coverage relates to Gothenburg, surrounding municipalities, the countryside and tourist resorts within the county of Västra Götaland.

The main aim of this study is to examine what type of news that are published from different kind of areas (municipalities around Gothenburg, countryside municipalities, and small municipalities with tourist industries) outside Gothenburg. We also intend to map out how the proportion of news is distributed between these areas and Gothenburg, and how they are distributed on different publishing platforms. We have chosen to do a quantitative content analysis of a total of 105 publications during five days. The platforms that has been investigated are SVT Nyheter Väst ́s Facebook, web site and local television broadcasts. The study is based in theories of news value and the public service assignment.

A few of the most significant results of the study is the frequency of subjects in different channels. In our result we could see that news about politics were more common on the web site and in local television broadcast. Another interesting result was that news distributed on Facebook more oftenly were based on big city actualities. That can be due to the fact that younger people and big city residents consume news on social media more than other groups in society. Another significant result was that 40 percent of the news came from Gothenburg. 20 percent of the news came from the municipalities around Gothenburg, the countryside municipalities and the municipalities with tourist industries. The final results showed that the most common article for these five days came from Gothenburg, was about crimes and published on the website.