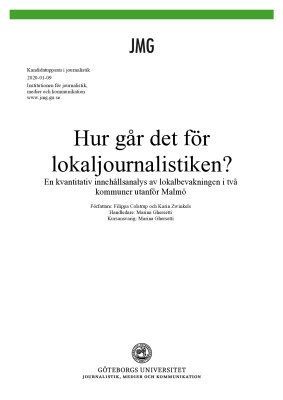 Thus the aim of this thesis is to study the local coverage of two municipalities outside of Malmö, Burlöv and Vellinge, and to discuss to which extent hyperlocal media are a complement to local and regional media. The focus lies on the coverage in hyperlocal media compared to local and regional media as well as the differences between the coverage of the two municipalities. In the analysis we have related our results to theories on the role of media in democracy, media ecology and the commercialization of media.

The study is based on a quantitative content analysis of the total news coverage mentioning either of the two municipalities during eight weeks spread out over 2019. For every article we have looked at the subject, the actors that get to express themselves, credit given to other media sources and the distribution of news versus opinion material.