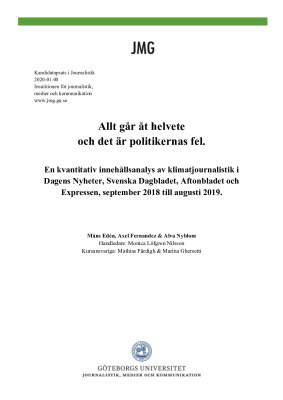 The aim of this study is to examine how climate change is framed in Swedish climate reporting, published on the website of national newspapers – Dagens Nyheter, Svenska Dagbladet, Aftonbladet and Expressen – from September 2018 throughout August 2019. Through a quantitative content study regarding climate change published online in chosen newspapers, the goal is to map out how Swedish newspapers use frames – consciously or not – to affect the public.

Through a perspective of the framing theory – invented and coined by Erving Goffman in the 1970’s – questions about frames are asked while reading chosen articles on climate change, to see which frames are most prominent. From previous scientific studies, it is suggested that certain frames in the news-media has certain effects on the readers. This study may hopefully contribute to the debate on how news in media are affecting the view on the climate change in Sweden.