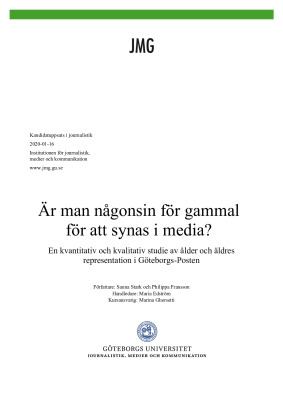 The purpose of this study is to examine age and the representation of elderly in Gothenburg’s major local newspaper, Göteborgs-Posten. This is studied through quantitative and qualitative analyses of 14 editions of the newspaper (995 articles) in the spring of 2019 where factors such as age, gender, topic, and role played by the subject of the article were analyzed.

The study uses different theories to further understand and analyze the material. For example theories about diversity, representation, and agenda-setting. These theories help explain what news are, how and why some news stories are chosen over others, and how different types of mediums, such as text and pictures, can affect the way people are perceived. There is little previous research in the subject, ageism in media, but the few studies that there are have shown that elderly usually are very underrepresented in the media. The questions at issue are: which ages are present in Göteborgs-Posten? In which context are elderly present and what kind of role are they playing? How are elderly described in the articles? This study adds to the existing research and contributes to the more specific subject area, ageism in media.

The results of the analyses show that elderly are underrepresented in the Göteborgs-Posten, but that they have increased in visibility in the media since previous research. From 5 to 10 percent to 12 percent. The arenas in which elderly are more prone to be a part of are international and entertainment news. This could be due to many political leaders and other types of leaders from other cultures being older. The results also showed that the majority of the subjects of the articles were men, and the topic most written about generally is sport. From the qualitative analysis, it was found that most articles about elderly were neutral and did generally not use negative words to describe them. The most used descriptive word was ‘successful’, but other words like ‘stubborn’, ‘aged’ and ‘understanding’ were also used.

The conclusion made is that elderly are still underrepresented in the media, but that, generally speaking, the subjects were described in a positive or a neutral way. Most of the subject were public figures (~39 percent), which means that if you are older than 65, you are much more interesting to the media, and likely to be present in the newspaper, if you are famous.