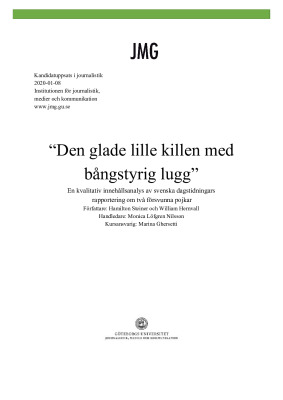 The intention of this analysis has been to investigate how two missing 12-year old boys, Dante and Mahmoud, and their disappearance are portrayed in news articles in the four largest daily newspapers in Sweden; Aftonbladet, Expressen, Dagens Nyheter and Svenska Dagbladet. Another intention was to analyze the amount of articles about each case, in the same newspapers.

The material that was analyzed consists of 64 articles, 16 of them covering Mahmoud and his disappearance, and 48 covering Dante and his disappearance. The material that was selected to the analysis is news articles published in the four newspapers during the two first weeks after each boy had disappeared. The articles written about Dante were published during November 2018, and the articles about Mahmoud in August 2019.

Theories about representation and framing of racial minorities and people with intellectual disabilities in news media have been used to guide the analysis, and to draw conclusions. To establish a schedule for the analysis, Robert Entman’s theories on framing and his article Framing, Toward Clarification of a Fractured Paradigm ​were used.​​ Each article was analyzed with the same questions and frames, based on Entman’s framing theories.

The results of the analysis show that Dante and his disappearance was covered by the newspapers with more frequency and a significantly larger quantity than Mahmoud’s. The results also show that Dante is more frequently framed in a way to stir emotions in the reader than Mahmoud. Another major difference is the reporters way of describing the boys and the cases with their own words. In Mahmoud’s case, the reporters tend to be more objective, and do not use emotionally charged words. In the reporting on Dante on the other hand, they are more subjective, and frequently use words of a more emotional character.