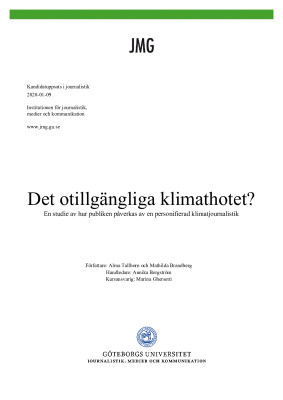 The purpose of this study is to analyse the effects of personalization in media, specifically media covering climate change. Personalization in media is a widely spread journalistic norm, yet it is not without some criticism from the academic world. Climate change is said to be one of our generation’s toughest battles, and thus one of the greatest news stories. With political leaders, international corporations and organisations finding ways to tackle the issue – the journalistic sector should do the same.

Media covering the climate change today is, in our opinion, dominated by scholars, politicians and NGOs. Which is also supported by studies of swedish and american media. In this study we want to research if this it the right way when engaging the public in the issue. Our frame of analysis and the aim of our study is the aspects of public interest; does personalization have an effect on the public interest of climate change issues? And issue importance; does personalization have an effect on the public’s perceived issue importance of climate change issues? The following question is if different groups of the public are affected differently.

We have conducted an experimental survey analysis in which we have given two different groups of responders, different stimulus. One with an article about climate change without a personalized case; and the other with an article about climate change which contained a personalized case. The content of analysis is the responders answers to questions following the stimuli. The questions was of different characters; mapping different characters of the responders, establishing index for issue importance and interest, and control questions to establish cause for the result. Each survey got 129 responses with responders from different demographic groups.

Our result showed that personalization has little effect on the public as a group. It had, however, some effect on specific demographic groups, specifically regarding the aspect of perceived issue importance. In the response group who received the non-personalized article, there was high correlation between issue importance, and gender, education, age and perceived knowledge and preexisting interest of the climate change issue. However this correlation did not exist in said demographic groups in the other group of responders, with the personalized article.

This tells us that the article without the personalized case was less accessible. However the personalized article also had some negative effects on, among others, women, highly educated and on the ones who previously stated high knowledge.