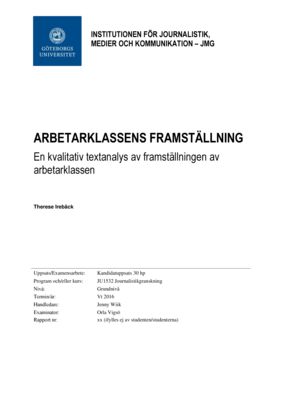 The working class is a broad group. It’s the cashier smiling at us at the cash register, the bus driver driving us to work. They make our phones, computers, cars. But few of us see them, think about their hardships or see their strength. The working class struggles on while we take their work for granted. And we are not alone in this blindness, media rarely gives them the voice they deserve, they would rather talk to their boss, or ask them questions related to consumerism or how they will deal, never how they will fight. Rarely do we give a big group of people so little room in media. And with so many people rarely being represented in a fair way or not represented at all, it becomes a problem.
The aim of this study is to analyse how the working class is represented in todays newspapers. The material of this study consists of six longer articles from the swedish newspapers Dagens ETC and Svenska Dagbladet. Two papers with different political leanings, Dagens ETC leaning to the left and Svenska Dagbladet to the right. They will be analysed using qualitative text analysis and theories from Erik Ohlin Wright and Pierre Bourdieu.
Results show that the two newspapers represent the working class in different but similar ways. The working class receive more attention in Dagens ETC compared to Svenska Dagbladet. With a deeper, but still fairly shallow, image of the working class