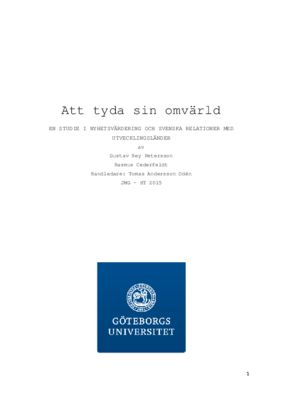 The purpose of this study is to investigate whether Swedish foreign aid and diplomatic policies has any effect on the selection of foreign news in Swedish news media. We set out to study news concerning countries that experienced a change in their relation to the former Swedish government, which was in rule between 2006 and 2014. The countries we chose for this was Nicaragua, Laos and Senegal, where the Swedish embassies were closed in this period. For Nicaragua and Laos the aid was also reduced. Further, Bolivia, Cambodia and Mali were chosen since the Swedish government opened embassies there, as well as strengthening existing aid programs. Our theoretical points of departure have mainly been a set of different studies on news values; the science of what events becomes news. We have included both the broader theories concerning foreign journalism in general and more specifically those concerning the relationship between foreign journalism and foreign policies. We had two research questions: Has there been any change in the amount of news material from reaching us from these countries since the changes in Swedish representation took place? Has there been any change in the kind of information that reaches us from these countries? Our study was conducted as a quantitative content analysis in which we have studied the amount and nature of news material from our countries of choice in Swedish news media, before and after the changes in Swedish relations towards these countries took place. The results of the study shows that changes in Swedish relations did not seem to affect the presence of those countries in Swedish news media, nor how they were represented in the major Swedish newspapers. No clear patterns were found except that of the general decrease of news from the countries we chose for our study.Our conclusion was that any further studies on this subject would need to encompass a much greater amount of material and a greater knowledge of the editorial circumstances of each news media-object.