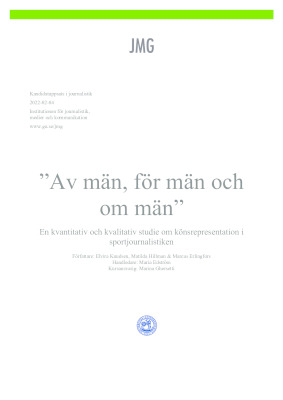 Theoretical framework: This study has been inspired by earlier studies in the same category, these earlier studies have also been used to compare results and thereby be able to put this study’s results into a bigger perspective where the results could possibly help show changes or developments in the invested area during time. As a base for this study three theories have been used, the theory of news values, gender logic and masculine hegemony.
These theories and earlier studies have helped us understand the historical effect and premises of gender in society generally but also specifically in the field we have investigated.

Methods: This study’s result has been achieved by using both content analyses and qualitative interview analyses, which both investigated the same four local newspapers. The quantitative survey analysed in total 473 articles published online, the survey took place every second day at 9:00 am during a period of two weeks. The study’s qualitative survey investigates the reasons behind the quantitative survey’s results by interviewing each
invested newspaper’s sport editor. This part of the study was done to understand why there are differences in sports reporting when it comes to gender, how the news editors view this difference and how they work to counteract this pattern.

Results: This study’s results indicate that sports dominated by men receive more attention in the investigated newspapers. A majority of the articles are about male athletes, and that men are used as interviewee more than women, even when the article is portraying women or a female dominated sport. The study shows that the two male dominated sports football and ice hockey are by far the most reported sports online in the local newspapers. The qualitative interviews show that the news reader’s interest measured by the amount of articles viewing
statistics is a big factor in how the news selection is made. It also shows a lack of editorial strategies concerning gender representations in the newscontent, but that the topic is a part of a constant daily discussion amongst the editorial staff. The editors interviewed in this study do however all agree that they, to a certain point, carry a societal responsibility in the aim for
a more gender equal reporting of sport.