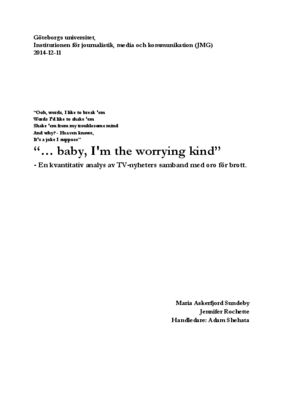 Title: “…baby, I´m the worrying kind.” – A quantitative analysis of the relation between TV news consumption and worry of crime. Authors: Maria Askerfjord Sundeby and Jennifer Rochette Year: Autumn 2014 Level: Bachelor degree Department: Department of Journalism, Media and Communication, Göteborgs universitet. Supervisor: Adam Shehata Summary: The aim of this thesis is to analyze the relations between worry of crime, both societal and personal, and consumption of news from the Swedish TV-channels SVT (public service) and TV4 (commercial). The cultivation theory claims that it is just the amount of TV that shows an effect on consumers and their perception of reality, like for example the mean world syndrome. But the theory has been criticized for not considering the possible effects that are actually related to other variables. These variables have weakened or totally eliminated the effects, previously explained by TV, in later control studies of the cultivation theory. In our study we take a few control variables in to consideration, and we only focus on the effect that a high TV news consumption has on the worry of crime. The art of storytelling is also a part of the cultivation theory that we use, mostly to point out how much easier it is today, especially through TV, to spread a story, or as the cultivation theory calls it, a message. The results are in line with previous research on the impact of TV. Our results show a significant relation between a high consumption of TV news and the worry of crime, both societal and personal. The effect of high consumption of TV news is stronger then all of the control variables except one where gender has a stronger effect on worry of crime, on a personal level. The results also show that the public service channels SVT has the strongest relations and effects on its consumers.