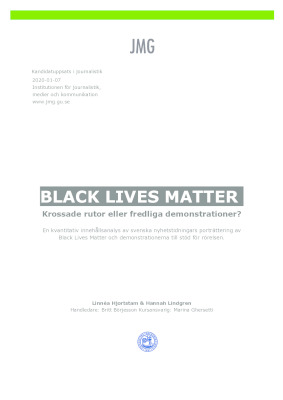 The purpose of this study is to examine how five Swedish newspapers portrayed the Black Lives
Matter (BLM) movement and supporting demonstrations during a time period between May 25th and June 14th, 2020.

The theory of framing, how people’s perception of a subject is affected by the media portrayal, is the
motivation behind this study. Theories about common news values and news angles are applied to
the articles. Additionally, quoted sources and descriptions of violence are investigated to determine if a protest paradigm, a pattern of news coverage that tends to focus on violence and disruption rather than the reason behind the demonstration, can be found in Swedish newspapers.

The study uses a quantitative content analysis of 266 articles about the Black Lives Matter movement
published by the newspapers Aftonbladet, Dagens Nyheter, Expressen, Göteborgs-Posten and Sydsvenskan. During the analyzed time period, major demonstrations were held in Sweden’s three
largest cities: Stockholm, Gothenburg and Malmö. With a cumulative approach, the theoretical
framework has been operationalized to create a codebook for analyzing the articles.

According to previous research, there are many signs of a protest paradigm in American newspapers.
This pattern was similarly present in the Swedish articles, evident in their recurrent use of official
sources like politicians and police. However, in the analysis of all the articles about BLM, the
protesters were quoted more often than police. While in the articles specifically about demonstrations
in Sweden, protesters were more likely to be excluded. For example, protesters were more often
mentioned than quoted compared to the police sources. This study confirms signs of the protest
paradigm in the articles about the demonstrations, evident in the great focus on violence and
disruption and the lack of protester voices. Unlike previous research, all protesters are not blamed for
unlawful activity that occurred during the demonstrations. Swedish newspapers tend to carefully
distinguish provocators from peaceful protesters. Finally, the covid-19 pandemic affected the media’s
portrayal of BLM and the demonstrations. The global pandemic was frequently mentioned and often
used as a news angle in the articles.