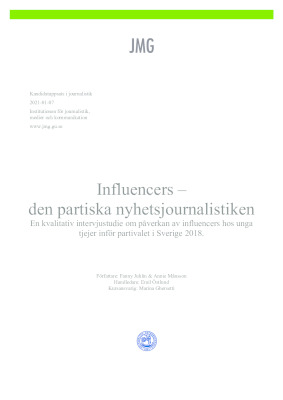 Theoretical framework: We have used four established theories to gain a deeper understanding of
our subject. It’s Social Capital Theory, Third Party Endorsement, Agenda Setting Theory and The
Two-step Flow. During the analysis we applied the theories on our results in order to understand it
better.

Methods: We have collected our material through eight different interviews with young girls aged
20-24. We chose these ages because it’s the influencers largest target group and those who take part of their content the most. The interviews were between 20 and 35 minutes long.

Results: All of the survey questions were answered during the study and we were therefore able to
get a result. The result is that young girls are not affected by influencers talking about politics on their social media. This is because the girls we interviewed believe that influencers do not have knowledge in politics. When it comes to other areas, fashion and beauty for example, the interviewees feel more affected by influencers, this is because they are considered to have knowledge in that area. Our results also show that our interviewees feel more confident in journalists than they do in influencers.