”BOYS WILL BE BOYS” 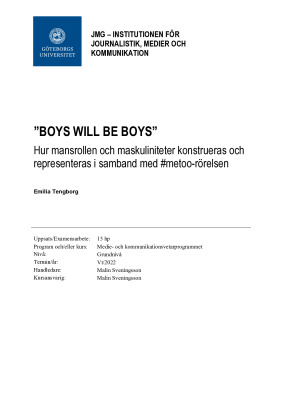 Executive summary
It was in the fall of 2017 in October that the #metoo storm began to spread around the world.It only took a few days before the two words “Me too” had become both global and viral as women, non-binaries and transgender people came together around the world to share their
experiences of sexual harassment and sexual violence by men. Since then, researchers have begun to ask themselves the question of whether and how masculinity is constructed both socially and culturally. This study aims to examine how Swedish news media reflect over
how men and masculinities are constructed and represented along with the #metoo movement. The study is furthermore going to critically examine how the male role, men and masculinity are described in ten selected Swedish articles published between October 17, 2017 and
December 31, 2017. The articles are written by both men and women. Norman Fairclough’s critical discourse analysis was chosen as the method and theoretical framework for this study. The purpose of this study is to evaluate if the articles articulate multiple masculinities and if
they challenge the current social practice in relation to gendered structure of power. The critical discourse analysis had in view to illustrate if the discourses in the text either reproduce
or restructure the current discourse order. The current social practice is explained in this study based on gender theory and masculinity theory. The results identified three different kinds of masculinities. The reproduced masculinity was associated with stereotypical behavior, for
instance violence, aggression, and sexuality. The reduced masculinity portrayed a hushed down man who got reduced by women in both the articles and the movement itself. The reformed masculinity described a new and improved kind of man who takes responsibility for his and other men’s actions. The results also discussed the three represented masculinities in relation to the #metoo movement’s ambition to reconstruct the current power structure between men and women.