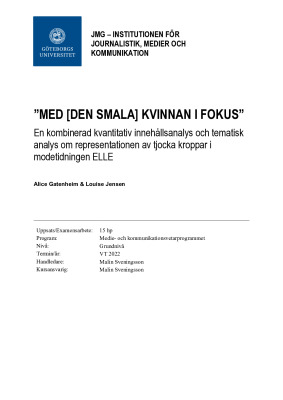 Executive summary
Normative bodies in the last century have been characterized by a very slim ideal. Lately women, especially on social media, have started to question what is considered beautiful and healthy and fat bodies do not seem to fit those categories. This was the starting point for this paper where we wanted to examine if this change of mindset is measurable in today’s fashion magazines.

ELLE Sweden is a magazine focused on fashion and beauty with women as their main target group. It’s also the fashion magazine with the greatest reach in Sweden. The editorial staff describes ELLE as a magazine that inspires and encourages women to stand out and find new ways to express themselves. But is that really the case for all women?

The purpose of this paper was to examine the representation of overweight and obese bodies in the Swedish fashion magazine ELLE. We wanted to have a closer look at how common it is for fat bodies to appear in the magazine today and in what context they appear. We also
wanted to examine if and to what extent there has been any change over time.

The results show that between the years 2001 and 2011 there hasn’t been any changes in how often fat bodies are represented in ELLE. Fat bodies do not exceed two percent of the content. In 2021 there’s a small change – seven percent of the visual content consists of fat bodies. The
results are still far from representative in proportion to the Swedish population where 45 percent of women are considered overweight or obese.

The results of the study show that fat bodies have historically been greatly underrepresented in ELLE, which they still are today. However, a small change has taken place as fat bodies are more common today than before, albeit still in an obvious minority. Three themes were
identified for the contexts in which fat bodies often appear when they are portrayed: the personal portrait, the fashion portrait and advertisement. Through these we see that the representation of the fat body is in some ways inclusive and progressive, and in other ways
not.