The effects of news consumption via selfcurated Facebook feeds 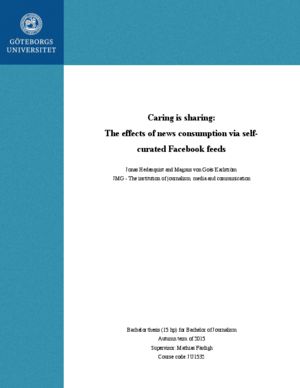 The purpose of our study was to research people’s media habits when it comes to news consumption through social media, Facebook in particular, and to try to ascertain if our theory that people today are lacking in source criticism skills has any basis in reality. Our theory is that social media users who rely solely or primarily on Facebook for news consumption are less likely to compare media coverage between outlets and channels, and validate sources, than consumers of traditional media. Broken down into component parts, the main questions we were looking to answer were: • To what extent does our population rely on Facebook as a primary or sole source for news and media coverage? • In what manner does relying primarily or solely on Facebook for news content influence criticism of sources and user acceptance of news content posted directly to their curated feeds? The method we chose was a quantitative study, as we believed that it was more important to begin with finding the frequency of these phenomena before studying the subject on a deeper level. This was done through an online survey that we had intended to send to certain groups of Swedes within the age range of 18-36, but due to being unable to find a way to reach this population we were forced to lessen our scope, and ended up with a highly limited group of respondents that led to a total of only 122 replies. As a result, our conclusions are only relevant for Swedish students of media, journalism and communication sciences. But within that subset, we did not find any conclusive evidence that the theories that we based our study on are grounded in reality. Also, due to the training and expertise of our population, it is not unlikely that they have a more critical approach to news, especially unsourced reports on social media sites. It also seems prudent to assume that they spend more time consuming news than the average person. In conclusion, it would seem that students of these sciences have a very balanced and self-aware approach to source control and criticism in social media environments, applying the same or even stricter guidelines. We also believe that our theoretical framework is sound and that the groundwork that we have done is solid, and as such present this thesis in part as a proof of concept with components that would be suited to be used for larger studies within the field in the future.