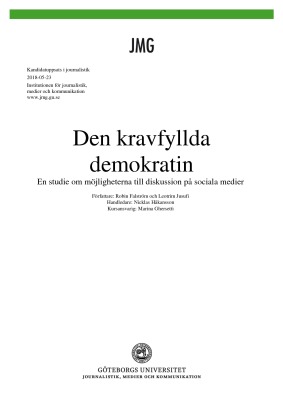 The media and the way that media communicate with its readers have changed drastically over the last few decades. New technology has made it easier for readers and journalists to communicate with each other through social media and comment sections.

In this study we explore how the commentary sections live up to the criteria of deliberative democracy on Aftonbladets Facebook page. And specifically, as pointed out by researchers, the two most important criteria: rationality and objectivity. The purpose of the study is to see if the deliberative discussions maintain a high quality in the comment sections.

To further understand why the comments did or did not meet the requirements we decided to factor in gender, the subject of the article and the dispersion of the post in the equation to see if it plays a part on the outcome of the result. According to the result those factors do not play a part in whether the requirements are met or not. The only slight difference was between men and women when studying what their comments were about. Men tend to comment more about other comments/commentators and women tend to comment about the content in the news article.

We came to the conclusion that the requirements for objectivity might be slightly easier to achieve, since they don’t demand a lot from the commentator. While rationality may be harder to achieve because of the higher demands, since being rational requires thinking and logic.
We would also have liked to study other factors, such as: if the commentators were Swedish born/foreign born and also the commentators level of education. But these two factors are far more comprehensive and require a lot more time to study, which we did not have.