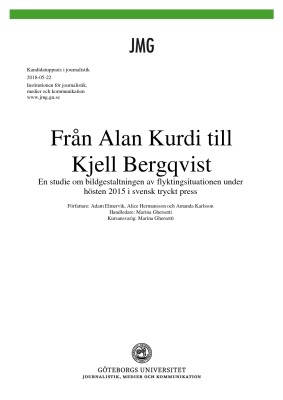 The intention of this analysis has been to investigate how the so called refugee crisis in the fall of 2015 was framed in news photos, in Swedish print media. Within this question at issue, the analysis has aspired to discover possible differences between the selected newspapers, and between different time periods during the fall of 2015. The end results are interpreted through the theories of framing, news values and orientalism.

The material that was analyzed consists of 218 news photos in Aftonbladet, and 254 news photos in Dagens Nyheter. Headlines, captions and preambles has also been included in the analysis, in order to interpret the photos from the perspective of the average reader.

The first step was to make a quantitative analysis of the total content. After analyzing the results, four typical cases were identified. These four news photos were then analyzed in depth, using the method of semiotic analysis. Accordingly, this analysis has taken both qualitative and quantitative factors into consideration.

The results show that refugees were the most common subject appearing in the photos, and politicians were the second most common. With this in mind, two issue specific framings could be identified in the analyzed material. The first one is referred to as “the framing of the otherness”, and the second one is called the “politician in professional context-frame”. In addition to this, several general framings were identified, such as the human interest frame, and the responsibility frame. Worth mentioning is that the latter of the two was more common in Aftonbladet than in Dagens Nyheter. The results also show that the attitude towards refugees in the content mostly was positive, but as time went by, it became more neutral. The attitude towards the refugee situation, however, was negative during all of the three months, but tended to be less negative in September.

One conclusion drawn, besides the framings mentioned above, is that refugees themselves has been the ones putting a face to the general situation. Previous research on journalistic text, radio and tv in Sweden during the refugee crisis has shown that refugees hasn’t been the most common main actor in the news. This suggests that refugees have been visible, but not as audible, in the Swedish news coverage of the events. The results points towards a few differences between the newspapers, but in some cases they were very similar to one another. For example regarding the attitude towards refugees and the refugee situation. Some general differences between the three months also was detected. In September, the attitude towards refugees tended to be more positive, which coincided with a more frequent news reporting, particularly in Aftonbladet.