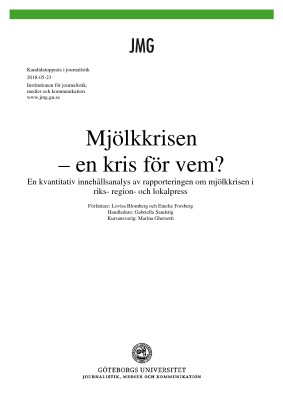 The study aims to find out how often the newspapers reported about the milk crisis, how much space the crisis received, how the crisis was framed and which participants that dominated. To succeed with this aim four questions were constructed.

The aim and questions have been answered using a quantitative content analysis together with theories about news selection, agenda setting, news frame and framing. Earlier research have also been used to support the result of the study, mainly the rural research. There was a total selection made of the articles during the time period 2014 to 2016 in the selected newspapers that contained the words “milk crisis”, “the milk crisis” or “milk + crisis”. The total material was 189 articles.