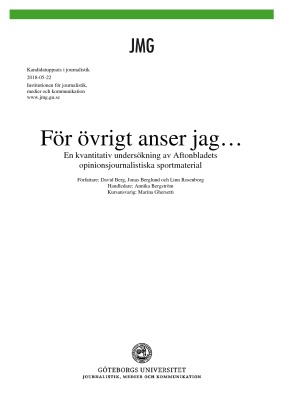 This bachelor essay seeks to examine the frequency of opinion journalism in the sport pages of the Swedish evening paper Aftonbladet. During the period that is examined these sport pages become an own annex and is then called Sportbladet.
It is based on five issues:

Former research shows personalization, commercialization and digitizing affects journalism in different ways. Increased commercialization makes private media companies aim for economic gain bigger. That in turn has an impact on the content. For example different journalists can be used in the marketing of the paper. The readers can get favorites among the writers. This interrelates with the personalization. Which subjects that are written about can also be affected. Popular and “easy” subjects are primed in a commercialized media market, according to earlier research. So by examine these issues, the study can relate the results to the theories and draw conclusions about how they may have affected the content.
The study does not examine material published on the web, so conclusions about the affection of the digitizing are harder to draw. But according to earlier research the digitizing also affects the content of the paper magazine.

The result shows that the frequency of opinion journalism overall has not increased. But the sports material has increased and the numbers of opinion articles are therefore higher. The opinion material is also more highlighted now and is more personalized with bigger bylines. The type of opinion material where the journalist plays a bigger role is also more common these days.
Popular sports such as football and ice hockey take big place among the opinion material and easy subjects such as accomplishment and conditions are more often written about than other subjects. So the increased commercialization seems to have an impact on the material.