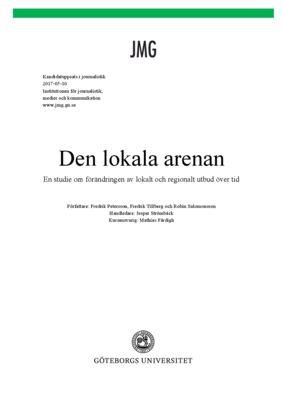 The purpose of this study is to examine how much of the content that is local and regional in local newspapers, with the perspective of change over time. If differences are seen, the aim is to further investigate and see which section of the newspaper that is mostly affected. Five newspapers that are a part of the same media group are analysed two weeks (spring and fall) during three separate years. Before, shortly after and a longer time after becoming a part of the media group, to establish if it may influence on the content.
To measure the amount of local articles the study used a quantitative method.
The main question is operationalized with a variable that arranges articles in the correct municipal-, regional-, domestic- or foreign area based on the newspapers individual release area. The study also contained a variable that tells us in which part of the newspaper the article is located. Its main function is to better see if any of the sections are more local or regional than others.
To understand our data this article uses theories about democracy, diversity,
concentration, ownership and economy. These theories give us a solid base to understand why the changes are happening, but at the same time they help to understand what possible effects the change in local material may have on it’s surroundings.
The results are interpreted by looking at all our collected material, and see to
how much of it that is local at any given year. 13 127 articles where coded and in total, the local newspaper remains quite local. A different result is seen when looking at the newspapers one by one, whereas most of them are much less local then before.
Two out of the five local newspapers in this study are increasing their local agenda.
Overall the news section remains local, even though it’s allowed less space in
comparison to other sections. Further, the newspapers are becoming more and more regional. The sport-, culture- and entertainment section especially.
One big discovery is the fact that the newspapers are getting much thinner,
losing half of their material over a twenty year-period.
These results are, as far as we understand, results of economic contractions and short-term goals within the media group. With the given theoretical framework, our conclusion is that it has damaging effects on the local democracy, as the local newspaper are playing a big part in serving its audience with information to build their opinions on.
Keywords: Local media, democracy, media group, media economy, diversity