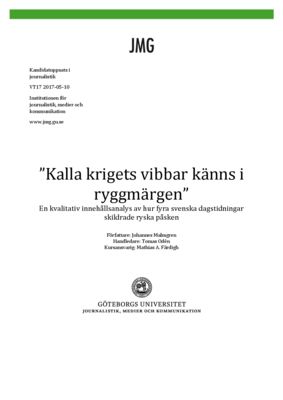 On 22 April, 2013 the Swedish newspaper Svenska Dagbladet carried a story that Russian military aircraft had practised simulated bomb attacks on Swedish targets, near Swedish airspace on the night of March 29. The Russian exercise was the first of a series of events, including the Russian annexation of Crimea, that preceded and may have influenced changes in Swedish public opinion toward Russia, that was increasingly viewed as a threat.
The purpose of this thesis is to examine how four Swedish newspapers, Svenska Dagbladet, Dagens Nyheter, Expressen and Aftonbladet, reported about the Russian exercise. Especially with regards to how Sweden and Russia was depicted in reports.
The method used is Ethnographic Content Analysis. Every article on the Russian exercise published between 22–30 April has been included in the study. Results show that Russia was viewed as a threat, undergoing changes and becoming more ambitious. Comparisons to the Soviet Union were common. The lack of response of the Swedish air force to the exercise was depicted as insufficient and surprising. Demands for more resources to the military and for Swedish membership in NATO were commonly made. This is in accordance with the theory of David L. Altheide about the use of threats as a culturally unifying theme, and risks as justifying certain measures. It seems possible that reports on the Russian exercise helped shape an increasingly positive public attitudes towards NATO and increased military spending.
Keywords: Russia, military exercise, Ethnographic Content Analysis, Svenska Dagbladet, Dagens Nyheter, Expressen, Aftonbladet