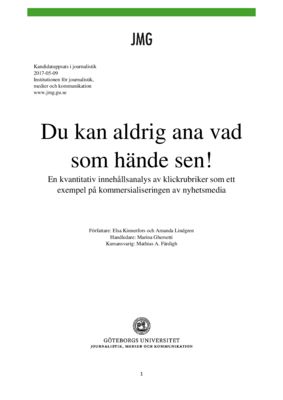 The purpose of this study was to investigate clickbaits as an example of how traditional news media is being commercialized through the movement to online news. The online media demands a more frequently updated material, which results in challenges for the news producers. Because of the large amount of online news, news producers who’s material is online-based need to find more innovative ways to attract their audience.

One of these ways is to create headlines that make the reader curious and prone to click their way into the article. Our study aimed to examine the frequency of these clickbaits on one of Sweden’s largest online-based media companies, Nyheter24. We wanted to see which articles were published with clickbaits and whether the clickbaits had coverage in the articles or not. Through a quantitative content analysis we examined 350 headlines with associated articles under nine news categories on Nyheter24’s webpage.

We used theories of commercialization of media and news values to be able to understand the results of our study. The results showed that 31 percent of the examined material could count as clickbaits, based on the definition which we had formed. The largest amount of clickbaits was discovered in the category revolving scientific research, where nearly 60 percent of the headlines were clickbaits. The least amount of clickbaits were found in the foreign news, where the result was only 8 percent.