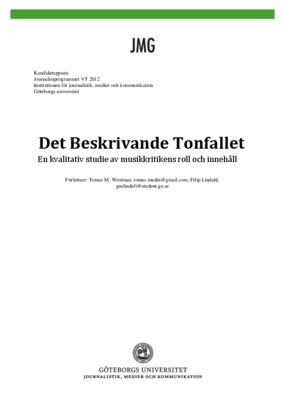 This survey aims to dissect music criticism in order to draw conclusions regarding its composition and expression. Based on these conclusions, a comparison is to be made between the music-critical aspect of journalism and journalism in general. Our main subject is the following: What is the quality of professional music critique, from a comparison of its content to the general ideal of journalism? Former research suggests that today’s music journalism is developed from the fanzine culture, i.e. that it has been professionalized from a group characterized by the amateur’s ambition rather than the ideals of general journalism. “For instance, the roots of the popular music press in the UK and the US lie not in professionalized journalism but in the amateur, underground press of the late 1960s (Jorgensen & Hanitzsch, s. 270). As further suggested, mainly by Widestedt, the main purpose for criticism is to convey a value and support it with descriptive arguments. The descriptive elements are regarded as the tools with which the write can explain its value. In light of this, the practical focus of this essay is these elements, and the argumentative structure. With a qualitative research method, and material drawn from three Swedish papers from the period of a month, will be analyzed in terms of disposition and its descriptive elements. These components are studied in each article and then compared to each other, in order to find whether there are any general structures, within the research material. The results show that there is a certain disposition, which is more lucid in the shorter articles, where an introduction puts the certain record in context. The ways these contexts are constructed differ, variations which we have categorized into a number of structures. A similar structure is apparent within the different ways of describing the music, and the following categories have been created:  The logic description: the author uses a non-abstract way of describing how the music appears, in a very logic sense.  The referring description: In this case the use of references enables the author to compare a certain piece of music with another artist or genre.  The abstract description: These types are characterized by a more abstract and literal linguistic ambition. Metaphors are commonly used to describe a certain feeling. These methods appear in almost every article and often together, and have different pros and cons. For instance, use the referring description may effect coherence and exclude the general reader, while the abstract descriptions often make an ambitious attempt of describing the creative dimension. At the same time it emphasizes a conflict within journalism, between sense and sentiment