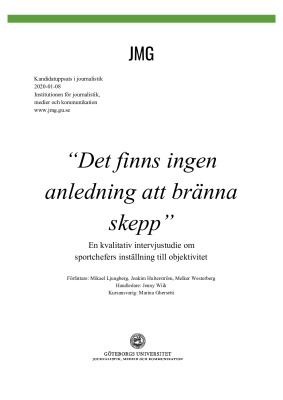 Objectivity is a vital aspect of the journalistic profession, and a pillar within the code of conduct expected of journalists. Historically, the term first emerged in the United States, as a reaction to previous practises deemed biased and propagandistic in favor of political parties. While the applicability of the term has been under debate during recent years, as some would argue its inherent standards are impossible to reach for anyone, we would argue that it is still seen as a benchmark of journalistic professionalism. As such, the purpose of this bachelor thesis is to examine what outside factors could affect objectivity within sports journalism.

The paper, as well as the actual survey, is based on three independent theories all meant to serve as indicative factors that could affect the main theory, which is the theory of
objectivity. The underlying three is the theory of Soft and Hard news, where the thesis is that sports journalism’s lesser position within the hierarchy of journalistic genres could be a factor affecting the content produced. Furthermore, the commercialization-theory is used to examine how commercial interests, such as selling subscriptions and gathering “clicks”, could affect the sports-editor’s decision making regarding objectivity. Would less objective reporting be considered, if said reporting generated more revenue? Last but not least is the theory regarding sports-journalist’s dependence on sources, wherein the Social Exchange theory is used as a complement. Would a sports-editor consider less critical and objective reporting, if it meant that the relationship with a source was maintained?

The method used in this bachelor thesis is qualitative interviews. A total of nine interviews were conducted, during a week-long period, all with sports-editors of different papers. Eight out of nine were conducted within the workplace of each editor. One took place via Skype, due to logistical errors. A pre-established questionnaire was used in order to cover all of the aforementioned theories, thus functioning as a common basis in all interviews. However, due to the chosen method’s semi-structural nature, some follow-up questions differed. Sports-editor’s have extensive knowledge of the field as well as a substantial amount of experience, thus making them ideal interviewees in terms of our purpose.

While it would be dishonest to exhibit our results as conclusive, due to the chosen method’s inability to do so, certain findings were definetely interesting. For example, the results found that editors would sometimes, at the very least, halt publications in order to maintain a good relationship with a source. Furthermore, an increased focus on commercial interests resulted in a more narrow reporting, where sports and clubs that generate the most revenue are given the most attention. This in turn results in an increased dependency on said clubs as a source. The results also showed that a historically low status has led to an increase in objective and critical reporting, as editors could sometimes feel the need to assert themselves, thus contradicting our original thesis.